Mythology Synchroblog 4: More Worlds Than These 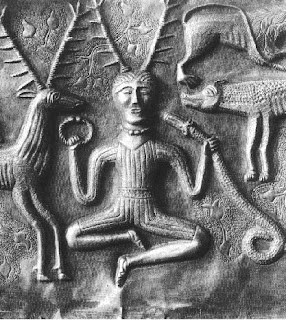 Mahud brings us all together again in Mythology Synchroblog 4: On Otherworlds

Those are the Welsh names for the realms of the underworld, middleworld and upperworld respectively.
We are taught that we start at Annwyn, travail through Abred and obtain Gwynfyd at last. Except that, through experience, I don't see it quite like that.

I think there's much more to it, but for a start, these three worlds will do.

My ego identity resides in Abred. It suffers, wails and travails. It also dances, sings and is transported by feeling of pure bliss. I love it here.

But for perspective I've spent some time in Annwyn, and a lot of that recently, arguing with the fragments of my shadow to return to me.

Spirit guides leading me, flanking me and perching on my shoulder, I'm fairly comfortable in the netherworld. There's a lot there to frighten my ego identity however, and this mostly manifests in nightmares of drinking, of losing a loved one and of being lost in a huge city.

Gwynfyd is where I'm building my spiritual sanctuary.
All black night, hard bright stars and pink billowing clouds, this realm is not inhabited by the issues of the middle world I meet in Annwyn. Rather, a huge, majestic presence seems to brood over it all, welcoming, offering rest and aid when the magical tasks I take on are larger than just myself.I offer namaste to this presence and start to create my magic. Up here is a good place from which to hurl healing or deal justice.

But as I said when I came in, I think there's a lot more to Otherworlds than just these three.

Fairies, big black dogs, ghosts and aliens seem to come from, and disappear into, another reality to Abred- and I don't think it's Annwyn or Gwynfyd either.

It's almost a given that we live and have our middle-world-being in a 3 dimensional reality - when all the mathematical and physical signs point to four, eleven or an infinite 'number' of them.
The outstanding question of course, is : how do we have even limited experience of these other dimensions? I refer you to Mr A Square of Flatland, folks. He doesn't believe in depth, either.
But he can see something odd, as a three-D object traverses his 2-D reality. He can't explain it, and he wouldn't tell anyone else about it, for fear of being howled out of town by the equivalent of the James Randi Challenge.
So he keeps his experiences mostly to himself, until he happens upon some other Squares who've had their own anomalous experiences, some of them just like his, some a little different,as you'd expect from a Multiverse full of extra-dimensional objects and beings, some of which may stumble upon Flatland sometimes.

And on a few rare occasions, Mr Square sees things before they happen in Flatland,or talks with other beings in his flativerse which he knows for a fact don't speak, or has a huge overwhelming feeling of there being something more then these two trusty dimensions he's been bred into.

He can't prove it, but he knows it, just the same.


Visit some of the other participants in our Mythology Synchroblog No.4!

Pic: Our friend Cernunnos, God or archetypal Celtic Shaman - who always looks to me like he's journeying to Other Worlds.